February 8 marks the Feast of St Josephine Bakhita, the patron saint of victims and survivors of modern slavery and human trafficking. Globally, it is observed in the Church as the International Day of Prayer and Awareness Against Trafficking in Persons.

Josephine Bakhita, born in 1869, was kidnapped as a child in the Dafur area of Sudan and sold into slavery. Josephine was enslaved several more times in her home country before being ‘bought’ again and sent to Italy to continue her servitude. Eventually, she was freed after many years of suffering and oppression. She became a Catholic and joined the Canossian Sisters in 1893. Josephine lived the remaining years of her life dedicated to her community, sharing both her personal story and her love of God, who she came to recognise had sustained her through her suffering.  She was the first person from Sudan to be canonised in 2002 and is the patron Saint of the country today. 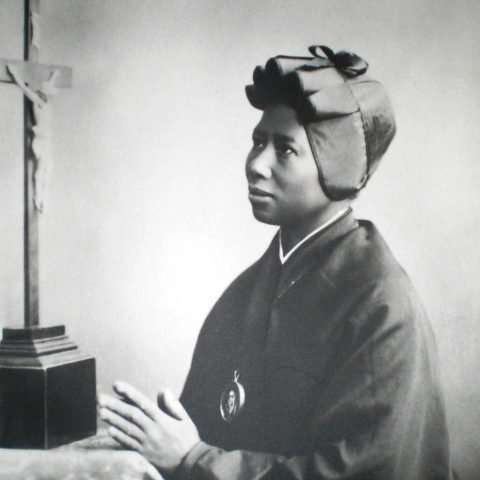 Almost 150 years after the life of St Josephine Bakhita, Human Trafficking or Modern Slavery remains a scourge in our world. During the pandemic, the crime of Human Trafficking has continued to grow, often in new ways. We know the pandemic has deepened economic and social inequality in many parts of the world, and as this inequity is the root cause of human trafficking, vulnerable people and groups continue to suffer.

The Loreto Sisters globally have a stated commitment to combatting human trafficking, a priority shared by the CJ Sisters (the Congregation of Jesus). This explicit commitment is unique amongst religious congregations. It is borne from an engagement with the life experiences of women and girls in particular, in situations where some might once have argued that religious women ought not to be.  Many IBVM and CJ Sisters and their colleagues are involved in supporting those affected by Human Trafficking on a daily basis in places such as India, Albania, Nepal, Romania and parts of Africa. They are doing extraordinary things. Others are involved in advocacy and lobbying for social, political, economic and legal change, from the IBVM/CJ United Nations Office to local networks worldwide. The task of education on this issue takes place in each Mary Ward School, seeking to transform the hearts and minds of those who will soon be leaders in our world and capable of shaping a future where slavery of all forms is destroyed.

Across the Loreto Province of Australia & South East Asia, this work mainly takes place in education and lobbying. In particular, Loreto proudly supports the work of ACRATH (Australian Catholic Religious Against Human Trafficking), a powerfully impactful organisation about which you can read more here. Additionally, Loreto Sisters and their colleagues on the ground in Vietnam, the Philippines and Timor Leste encounter women vulnerable to trafficking through their work and provide support and shelter. Like St Josephine Bakhita, each of us is called to stand in solidarity with the victims and survivors of Human Trafficking and respond with loving care, prayer, awareness, and action.

Read more about Bakhita Day here and join the activities planned by the Talitha Kum network on February 8 here.