Care for our Common Home…

in the Season of Creation

“Use your young eyes and store away pictures of all that is beautiful in God’s creation; from the passing glimpse of a tiny wildflower or of a little brook with its fringe of ferns and grasses, to the magnificent view of a lofty mountain, or of a broad river with its white sail-boats skimming like the birds over the smooth, bright waters.”
– Mother Gonzaga Barry –

The Season of Creation is marked across the globe by the Christian family from September 1 – October 4. The celebration acknowledges that we all share a role as stewards of God’s creation; that our wellbeing intertwines with the Earth’s wellbeing. The theme for 2021 is “A Home for All? Renewing the Oikos of God.” Oikos is a Greek word for ‘home’. In the first account of creation in the book of Genesis, we are told that God set a dome over the Earth. The word ‘dome’ relates to ‘domicile’ and ‘domestic’. In other words, God puts us all – all people, all life, under the same domed roof – we are all in the house, the Oikos of God.

In the early years of the foundation of Loreto Abbey Mary’s Mount, Ballarat, Mother Gonzaga Barry was dedicated to creating a sense of home for her pupils. A home steeped in the beauty of creation through the magnificent grounds and gardens, encouraging a sense of responsibility in her students to care for the world and those in it.

This year’s theme echoes Pope Francis’ 2015 encyclical Laudato Si. This year the Catholic Church launched a seven-year action plan to bring to life the key themes of Laudato Si, which overlap closely with the ongoing priority of the UN around the Sustainable Development Goals.

Our worldwide Mary Ward family, under the coordination of the Mary Ward JPIC and UN Offices, is committed to integrating a theological understanding of the sacredness of creation with concrete action and education. They aim to achieve long term political action on behalf of our common home, both in its natural environment and for all its inhabitants. As the UN Climate Change Conference COP 26 approaches, the international community’s attention will again focus on the commitments and/or excuses our world leaders will make at this liminal time for the planet.

In a special way, during the Bicentenary year of the Irish branch of the IBVM, the global Loreto family has been asked to participate in an ecology project to honour Teresa Ball’s foundational and visionary work and to give witness to our care of creation. In Australia, the project will focus on tree planting initiatives across Loreto schools, the Province and friends of Loreto. Already we have seen schools engage in community tree planting activities and others outlining their commitment to planning the involvement of school families and past pupils in tree planting projects throughout 2022. John XXIII College in Perth found a particularly creative way to introduce key messages to their school community through the placement of large decal stickers from the recent Australian Bishops Social Justice Statement’ Statement’ Cry of the Earth, Cry of the Poor”, which also references the theme of the Season of Creation.

Throughout this Season of Creation, we invite you to learn and reflect on its themes and connectedness to our imperatives as a Mary Ward family to act for ecological justice. Check the Province Facebook page for regular updates and the Province website for resources from across our network. 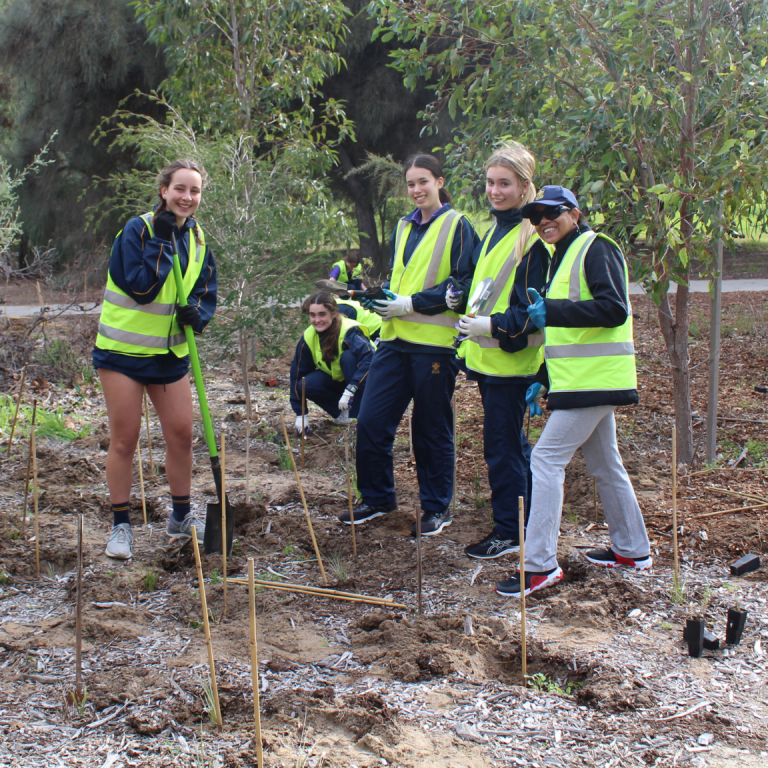