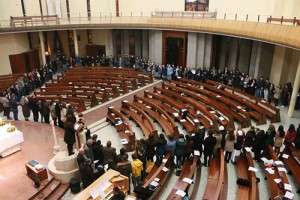 Mary Ward Loreto Foundation in Albania is planting hope with a human rights approach to combating modern day slavery. The aim is to eradicate poverty, the prime cause for human trafficking.

Human trafficking has become a billion-dollar industry that is projected to overtake arms sales as the most lucrative illegal business in the world, said international expert Loreto Sister Imelda Poole.

“At the moment it is second but it is rapidly overtaking guns and arms and it has already overtaken drugs,” said Sr Imelda.

“Many drug traffickers are now human traffickers because they are getting more money and it is more clandestine — they are not
caught as much.” 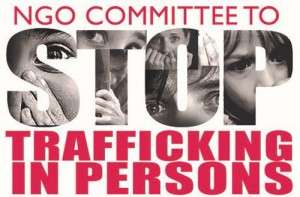 Sr. Imelda Poole is President of the Religious in Europe Networking Against Trafficking and Exploitation known as RENATE and  founded in 2009. RENATE is a European network of religious and lay co-workers who are committed to work together in the fight against human trafficking and exploitation across 27 European countries.

“The stigma of being trafficked is huge,” she said, adding that it often gets in the way of recovery and reconciliation.

Although human trafficking is primarily about women being sexually exploited, Sr Imelda has seen a rise in male victims being trafficked for labour. 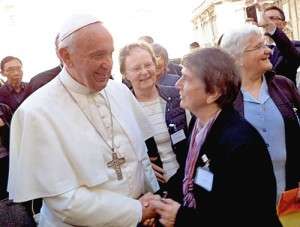 “Often people only talk about sex trafficking, but I have to say that in my experience right across Europe the number of men being trafficked is going up,” she said. “Nevertheless over 60 percent of trafficked people are trafficked into the sex industry still and nearly 70 percent are woman. You will find sex trafficking in every city of the world.”

“It is important you look at the physical consequences of human trafficking,” she said. “Often they come into a shelter where they are in post-trauma and they can’t really talk about their experience because many of them would have disassociated. They have physical symptoms, psychological symptoms (and) maybe they have to come off drugs because of the abuse that they’ve gone
through and trust is a huge issue — who can you trust after that?”

Mary Ward Loreto manages six centres in different parts of Albania. The focus of the work is anti-human trafficking and while mainly focussed on prevention, is also in direct action through the work of all the projects.  The work is with women, youth and men from the most isolated and marginalised parts of Albania where the people are the most vulnerable to being trafficked.

In these Albanian-led projects which include partnerships with shelters and the running of a Mary Ward Loreto advice centre for exploited and abused women, Sr Imelda takes a pastoral approach to rehabilitation and human and economic empowerment with a human rights approach.

“Pastoral care of course is part of the rehabilitation process,” she said. “As we journey with these people (we remind them that) … they are in the heart of God who loves and cares for them despite the injustice.”

“The root of that injustice is an imbalance created by capitalism,” Sr Imelda said.

“It is generally agreed around the world that the explosion of this terrible crime is based on the roots that come forth from this misuse of finance and power,” she said. “Every trafficked person comes from some kind of vulnerable situation that arises mainly from this explosion and overwhelming imbalance.”

Images: Right from top – Chain united against trafficking, sign for the NGO Committee to Stop Trafficking in Persons, Sr Imelda Poole had the privilege of meeting Pope Francis and asked for his blessing on the work of RENATE.