The Loreto community last week farewelled one of its most respected and well regarded Sisters, Veronica Brady, at the age of 86.

She was a courageous and vocal advocate responding to the issues of the day and campaigning for those affected by the injustices she saw in the world.

“Fearless as a teacher, academic and champion of those forced to the edges of society, Veronica exemplified the spirit of Loreto in her quest for truth and for justice.  Her commitment to education was fired by a generous tenacity to open minds, to both the beauty and pain of the human condition,” said Margaret Mary Flynn ibvm, Province Leader, Loreto Australia & South East Asia.

Veronica Brady was born Patricia Mary Brady on 5 January 1929, “Veronica” was the name she adopted when she entered the Loreto order at the age of 21.

She went on to further her studies at university just after World War II, at a time when people had a strong desire to make the world a better place.

Veronica taught at Loreto Kirribilli (Sydney) before moving to the University of Western Australia (UWA) in 1972. With the late Bruce Bennett she championed the introduction of studies in Australian literature sometimes in the face of stern opposition.  She became an associate professor in 1991.

A close friend, Gail Jones, who met Veronica when she was 18 years old, spoke of her courage as a moral crusader. “What words are adequate to demonstrate her radical effect in the world; her utterly distinctive presence, her spiritual energy and the intensity she brought over years to her learning and teaching, her capacity for friendship, and love, and abiding affections. She praised the world idiosyncratically. Her theology was eccentric. She was so much larger than her body.”

Another close friend and colleague, Professor Dennis Haskell said, “She was fearless, a “Mother’s Courage” whose causes were her “children”. That courage often put her at odds with governments or the Church, and drew controversy, but also admiration from many people across a wide range of Australian society and overseas. She was a literary commentator whose work was noticed well outside the literary community. She was a “white” person whom the Aboriginal community trusted. A symbolic figure for many women engaged in Australian literary, religious and social studies. The only literary critic whom Patrick White trusted and admired.” 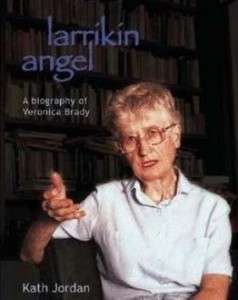 Veronica spoke out publicly against the Vatican’s stance on abortion, homosexuality and contraception and was actively involved in the Aboriginal Rights Movement.

On the topic of Church and women, Veronica said in an interview with good friend and ABC Journalist Phillip Adams, “It is often viewed that the priest is a step-up beyond the rest of us and is revered profoundly. That doesn’t seem to be true to the founder of the whole show, Jesus.”

In the same interview Veronica expressed gratitude for the support of the Loreto Sisters, “I’m fortunate to belong to a community which has been pretty brave in the way they have put up with me!”

Many of her friends and colleagues from UWA described her as a “larrikin angel”. This epithet became the title of a biography written by Kath Jordan. On its back cover Fred Chaney is quoted as saying “In an often smug and complacent society we need Veronica Brady and her ilk to remind us to look beyond ourselves. I think Jesus would be OK with her”.

She’s probably testing him out right now! Veronica’s contribution to Australia will be long remembered.