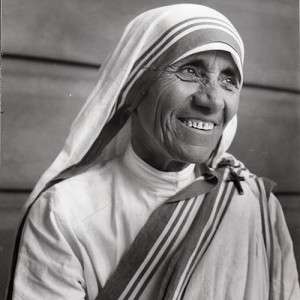 In the Philippines, people know one thing about IBVM-Loreto. “That’s the order Mother Teresa left, isn’t it?” I feel a bit defensive when I hear this – wanting to say that she used to send the orphans she collected from the streets to our orphanage at Entally, that she asked to be buried from our chapel in Calcutta, that she stayed with Loreto Sisters in Australia when she first came, that in some ways she felt she had not left the IBVM but taken Mary Ward’s charism in another direction.

Mother Teresa had an enormous impact on the world. Her congregation has spread rapidly into many areas of crisis and deep-seated, long-term poverty. Her compassion, together with that of her Sisters, has captured the hearts of many. She portrays one very important face of mercy – the face of one who picks the victims off the road and does what is possible to restore their dignity.

Coming from a committed Catholic family of Albanian origin, her religious formation in Dublin and Calcutta would have been as Ignatian as was possible in those days when so little work had been done on the essence of Ignatius’ legacy or on the story of our founder, Mary Ward. One can only imagine the cross-cultural demands she faced in this journey, and then the move to India. She enjoyed teaching for fifteen years in Loreto schools in India. In 1946 Mother Teresa felt a strong “call within a call” to move from this school-oriented life to one that actually served those who were poorest in this vast continent, to care for the destitute. 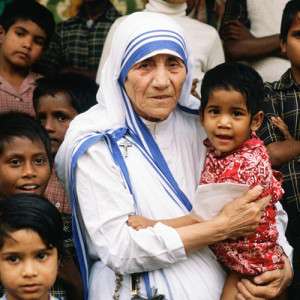 Loreto Sisters from Ireland had been brought to India in the 1840s to educate the children of the British Army. They accepted pupils from all faiths, and developed free schools and orphanages for poorer children alongside their more recognized schools. However, there were other families – millions of them – at a more destitute layer of society. Treated and labelled  as ‘untouchable’, these people were born, lived and died on the streets. These were the ones to whom Mother Teresa felt called to give her life. She left with blessing from the Superior General, with practical support from sisters in charge in India, but probably without much understanding on the part of many. She took with her the prayer books the Sisters used, their current understanding of authority and life in community, and many customs, and these remained her guide even as ways of living religious life changed after Vatican II.

What can Loreto Sisters say about her? I think we thank God for her gift to the church and the world.  Each era is shaped by needs and opportunities, and by prophetic responses. There are two separate but linked Calls in this area of love of the poor: one is to tend the broken, to bind up wounds and to ensure dignity as they face death. The other is to advocate and educate people who might change the system of greed and power which divides and destroys lives. After Vatican II more emphasis has been given to advocacy work, to questioning the structures that leave so many excluded from the right to participate in our society. In India and elsewhere Loreto Sisters work in new ways with justice advocacy and educating young people to critique society. However, Mother Teresa’s love and care is so symbolic of the heart of the Gospel that it has a special word to all people of good will. 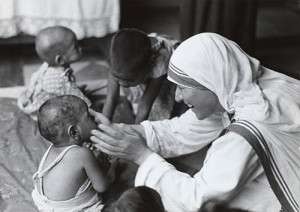 If more had been known about Mary Ward, Mother Teresa and the Loreto Sisters of that time might well have seen that she walked in the footsteps of our founder. Mary Ward left her home country to enter a religious congregation in a foreign land. She also experienced a call (from the monastic life of the Poor Clare convent) to something other, something more for the ‘glory of God’. She had an attentive ear to the signs of her times.  400 years ago that meant helping people, through education and spiritual conversation, to realise the gift that the Catholic faith could be in their lives. Unlike Mother Teresa, Mary Ward did not receive any approval from the Church leaders during her life. Indeed her congregation was suppressed, and she died a laywoman, but she retained her
great love and loyalty to the church while holding firmly to her belief that God wanted a more active life for women religious. Rather than canonisation a mere twenty years after her death, Mary Ward had to wait over 250 years to be even recognised by Church leadership as the founder of the congregation she had started and shaped. But I think she would rejoice that Mother Teresa, a woman after her spirit in some ways, had touched the hearts and lives of so many.

Loreto Sisters from many provinces are going to Rome to celebrate her canonisation and I am sure many will feel that Mother Teresa carried forward the commitment at the base of the mission of all Mary Ward women: to go where the need was greatest. We rejoice wholeheartedly with all the Missionaries of Charity and pray that this work will continue to flourish.

Mother Teresa of Calcutta will be canonised on the 4th of September 2016.