Enter a keyword, year or series number or select a section or agency below. 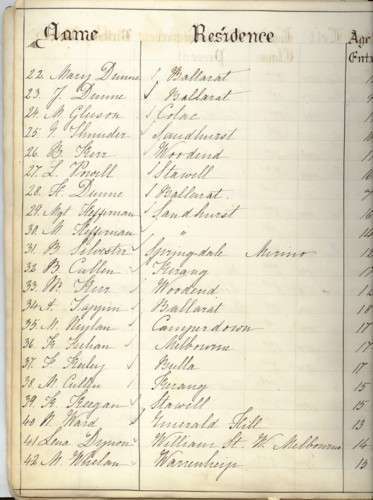 Series consists of two volumes, one probably the original Register from 1875, the other probably copied from the 1875 Register and continued. The original Register is a dark brown exercise book with gold border and gold lettering "S.M." on the cover. The label on the title page is "Loretto Record, Mary's Mount 29th September 1875". Register records Name, Residence, Age at Entrance, Arrival, Left, Last Class, Residence at Present, Birthday, Death. From 1889 the entries are in pencil and may have been added later. Last entries in this volume are for 1892. The second hardback volume has a brown paper cover with title on fly leaf "School Register, Loreto Abbey, Mary's Mount from Foundation - September 29th 1975" The first few pages are an alphabetical index to the names which have been entered under a single number registration number. Entries include Number, Name, Residence, Arrival Date, Departure Date, Destiny (often married name, later entries have tertiary studies), Birth (day and month only for earlier entries) and Death (later entries do not have this information). The Register records boarders only until the early to mid 1940s. An alphabetical index has been made to the Register by Archives.