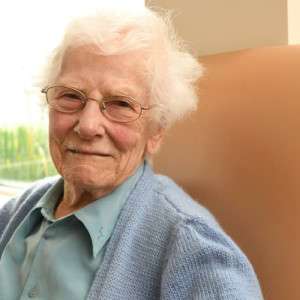 The 99-year-old will be celebrating the milestone with family and friends on Sunday at Nazareth House.

Sister Caroline said looking back on her 80 years as a nun was an amazing feeling.

“I never thought I would have done so much.”

Sister Caroline was born in Portland in 1919 and grew up in the small western Victorian town of Merino.

She joined religious life in 1938 at 19 after completing her early years of secondary school by correspondence, then later as a boarder in Portland.

“We had an Irish novice mistress who thought us Australians were a bit brash, and we needed to be toned down a bit. But we persevered and we all made the grade. I am the only one of that group left now,” Sister Caroline said.

In 1941, Sister Caroline professed her vows as a member of the Order of Loreto in Ballarat.

“My music teacher was talking to me one day and asked what I wanted to do when I left school,” she said.

“I had always thought I would be a teacher and she said ‘have you ever thought of being a nun?’ That was the first time I ever thought of it. When I thought more about it and saw the good example and edification of the Portland nuns I decided that was what I would like to do.”

Sister Caroline dedicated her life to service as a teacher, first in primary, then moving on to tertiary education.

She taught at many schools in Victoria, Adelaide and Perth, and only retired 10 years ago at 89 from a position teaching education at Australian Catholic University in Ballarat.

“I was 89 and it was just coming up to my 90th birthday when my superior said, ‘if people know that you are 90 and are still teaching they might object’. So I retired,” Sister Caroline said.

Teaching had run in Sister Caroline’s family. Her mother was a teacher and her mother’s grandfather was sent to Australia from England by the British government to set up schools in Victoria.

Sister Caroline’s journey in teaching began in South Melbourne, before she moved to teach in Ballarat, Adelaide, Perth, Blackburn and back to Ballarat where she spent most of her later years.

“I had big classes. The biggest class I ever had was 125 in Redan after the war,” she said.

“I have never had any problems with controlling children. They knew if they pleased me they would get a special look and if they didn’t get that look and I was frowning at them, they knew someone was wrong. That was as good as a correction.

“I loved to see a child growing. These little preps would come to school at the beginning of the year and they might be able to tell you their name, but they couldn’t do a thing in the way of writing. By the end of the year they were writing stories.

“To see how every day they changed and the way they would go home and tell their mothers stories of what they did at school was what I loved.”