Well, Well Sisters, Here You Are At Last.

“Last night, we were awakened by the ship stopping, and great cheering of the crew, for the pilot who came on board. … When we woke in the morning we were safe at Sandridge Pier and crowds of beautiful ships round us.  Said grateful prayers and hurried up on deck.”

She goes on to describe the hustle and bustle of arrival; packing, luggage arrangements, customs, farewells and greetings, arrangements for further travel and accommodation; the usual almost surreal first day in a new country.  We can only imagine the feelings of these women and girls, arriving on dry land after nearly three months at sea.

Berchmans Stafford also wrote a travel diary and she describes, a little more nervously, their arrival. “About two o’clock last night we were wakened by a sudden shock occasioned by the stopping of the vessel to take in the Pilot. The Steerage passengers shouted and cheered in a most alarming manner. We slept very little during the remainder of the night. Sr. Xavaria stood at her porthole admiring the lights in the ships we passed and the land opposite to us I could see all these beauties from my top berth by stretching my neck a little. “

There was further confusion when there was a delay in their being met.  Their ship, the ‘Somersetshire’, had arrived at Cape Otway late at night, too late to telegraph Melbourne and so the Bishop of Ballarat had not heard of its arrival until morning.  At any rate Bishop Michael O’Connor was delayed as he had headed in the wrong direction, taking the train to Ararat rather than to Melbourne and found himself stranded 25 miles west of Ballarat.   Fr. Dalton, uncle of M. Berchmans Stafford, was held up in court.  At last two Jesuits, Fr. Cahill and Fr. Watson, who had been deputised by the Bishop, came to meet them.  Fr. Cahill, rather at a loss it seems as to what to do with the newly arrived Sisters, took them around to see the Archbishop of Melbourne, James Goold, who was out.  Not a very auspicious beginning, but the day seems to have improved from thereon in.  Lunch was particularly enjoyed, as it was the first fresh tea and bread that they’d had in two months and as M. Berchmans pointedly comments, “besides, it was three o’clock”. 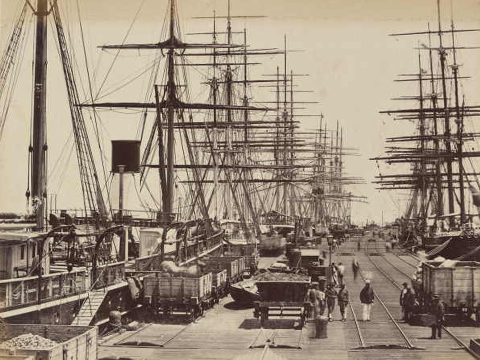 After lunch, they went up to the roof of the Archbishop’s residence to enjoy a panoramic view of Melbourne helped by a pair of opera glasses.  They were taken on a tour of the under-construction, St. Patrick’s Cathedral, the glory of which was evident, and perhaps gave them a little more confidence in their new country.  M. Berchmans’ uncle joined them and their accommodation for that night was arranged; again, rather haphazardly it seems.  It was found that the Good Shepherd nuns only had room for five visitors so lodgings were hastily found elsewhere for the other half of the party.

But they took it in their stride, M. Gonzaga, particularly, never losing her joy in the new surroundings and confidence in her mission.  They were very relieved to see Bishop O’Connor at Abbotsford in the morning.  In her diary, M. Berchmans says that the Bishop welcomed them with a “Well, well Sisters, here you are at last.”  “We felt that we had got home at last. It was such a comfort to meet him.”  Bishop O’Connor was to become a beloved friend and support for the early years in Ballarat.

And the day after Landing Day?   All aboard the 11 o’clock train for Ballarat.

‘Landing Day’ marks the beginning of the ministry of the Loreto Sisters in Australia and South East Asia.