Whilst on pilgrimage to the lands of Mary Ward I was really struck by the reality that Mary Ward was a refugee.  As Chris Burke pointed out to me: They probably did not use the term ‘refugee’ in those days, but many people were uprooted because of religious persecution.

Unable to practise her faith or to act according to her beliefs and convictions, Mary left her homeland, her family, her family’s resources and all those amazing home comforts and cultural supports believing she would find freedom, stability, acceptance and hope. Like many contemporary refugees, Mary’s family knew persecution, trauma, imprisonment and displacement. Mary’s early life involved moving from house to house for protection and safety. Her family members were activists, belonging to an underground resistance group, who believed they had a right to hold with their beliefs regardless of the monarchy’s choice.  They were monitored by the authorities and were imprisoned in York and London.  In leaving her homeland Mary Ward was both escaping religious persecution and desiring a life where her God-given gifts and hopes could be developed, celebrated and used in service of others. 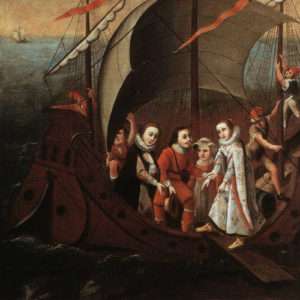 Our pilgrimage channel crossing was made on a very smooth and calm day, which was of great relief to a number of seasick-prone pilgrims. Still, glassy water below and a clear, summery sky above contributed to a restful journey. Mary, on the other hand, boarded open boats under risky conditions, the threat of arrest ever-present on the shore. While we gaze on the boat journey panels of the Painted Life deriving deeper meaning and symbolism, no doubt these crossings were dreadfully uncomfortable and full of danger.  In 1618 Mary even experienced a mutiny on board her boat while making the channel crossing.  I wonder if the passengers would have automatically assumed that they would reach the other side.

When Mary did reach the Spanish Netherlands she had to find her own lodgings and support.  She had nowhere to stay in a land where different sounds filled her ears, tastes tickled her tongue and cultural and ecclesial conventions would have contrasted with those at home.  I wonder whether Mary’s nominated role as extern sister with the Poor Clares, begging daily for months in the city and surrounding countryside, was in any way linked to her status as a foreigner. Here was an intelligent person with skills and strengths, hopes and dreams, charisma and spirit undertaking menial, back-breaking work. We hear the same comments these days: ‘they will take our jobs,’ ‘let them have the jobs that Aussies don’t want’… 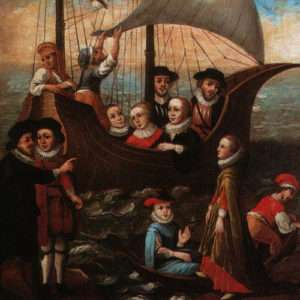 The whole Judeo-Christian narrative is dotted with stories of strangers in a strange land.  This World Refugee Day, let us remember the origins of our particular narrative. Let us claim the way in which the themes of hospitality and hope (and lack thereof), flee and flight, persecution and possibility shaped Mary Ward’s spirituality and story and be open to the way in which these parts of our shared story make claims on our minds, hearts and hands today. When we see ‘strangers’ taking risks to enter our land, when we see ‘foreigners’ undertaking menial work, when we see beggars, when we encounter the strong desire for a life-giving future of service and citizenship… let us ask Mary Ward to guide our thoughts and actions in the areas of advocacy and acceptance, friendship and faith, petition and protest.

The Loreto Justice Network honours all friends of Mary Ward who place the plight and promise of refugees at the forefront of our prayer and action.  Many of our schools engage in empowered-to-work programmes that offer placements to recently arrived Australians. We are mindful of those who: offer hospitality in their homes and parishes, tutor migrants and refugees, march/write and petition on behalf of those incarcerated by our government, support projects such as Sydney’s House of Welcome and Melbourne’s Brigidine Asylum Seeker Project.  We honour Loreto Sisters who are refugees and recent migrants, transforming our lives with their personal and family experience, stories, suffering, questions, desires and hopes.

Loreto in this part of the world has demonstrated a long-held commitment to the support of refugees and asylum seekers with Sisters having worked in refugee camps overseas and detention centres here in Australia. Through parish ministry, interfaith dialogue, prison ministry, school outreach and personal vocation, many Mary Ward people express their faith in an openness to those who are newly arrived in our vast bountiful land.

Mary Ward International Australia supports an employment program for asylum seekers assisting them in preparing their resumes and developing interviewing skills. Loreto Sister, Rachel McLoughlin ibvm, works as a physiotherapist at a medical hub for refugees in Brunswick each week and Libby Rogerson ibvm helped shape the post-election letter to Prime Minister Scott Morrison, in which we are all invited to respond to three justice issues discerned by the peak body of Catholic religious orders in Australia:

As you set the agenda for the future of Australia and this term of office, we ask that your Government gives priority attention to several areas that might restore Australia’s reputation and practices as a compassionate and creative nation.

Firstly, as a matter of priority we ask that, having secured the borders and stopped boats coming to Australia, you revisit the Government’s position in relation to the treatment of asylum seekers. Australia needs to take its fair share of asylum seekers and to restore its reputation as a humane and compassionate country. We ask that steps be taken to: immediately restore SRSS which has left many asylum seekers living in the community in dire circumstances and reliant on NGOs and faith- based organisations to meet basic needs of shelter, food and clothing; enact a public one-off moratorium for asylum seekers in the community, giving citizenship to those awaiting the processing of their claims; bring asylum seekers in off-shore detention who have been judged to have a medical condition to Australia and re-start negotiations with third countries for those remaining; and take the initiative to restart negotiations with other countries towards an agreed regional solution that honours Australia’s obligations.

According to the last census, nearly half of Australians were born overseas, or have at least one parent born overseas.  Just as in Mary Ward’s time, the spirit and story of our land has been shaped by the human experience of persecution, journey, arrival, seeking acceptance, false starts, cultural misunderstanding, dogged perseverance and undying hope for a better world (and church). This World Refugee Day we invite you to explore the refugee experience in your own heart and across our Mary Ward story of four centuries, and commit to a small action of solidarity with those who seek our friendship, enrich our many faiths and celebrate the diversity of our shared humanity.