Enter a keyword, year or series number or select a section or agency below.

St. Aloysius School began in the goldfields south of Ballarat and was run by Michael Campion Carey.  The original school was in Darling Street.  In December 1881 a severe storm swept away part of the school.  A teacher, Miss O’Connor, is reported as having bravely held up a wall that was about to collapse on the children.

On 24th May 1882, Dean Moore blessed a new school for girls of three classrooms in Redan.

In 1882 the Loreto Sisters were asked to staff the school.  The new school, a timber building to accommodate 200, was destroyed by fire four years later.   It was replaced by a brick building on the corner of Ripon and Warwick Streets.  The school was opened on 9th September, 1886.

In 1901 the school was handed over to the Sisters of Mercy but in 1907 Dr. Higgins asked the Loreto Sisters to return, promising transport for the nuns and three or four lay teachers.

In 1914 St. Aloysius Church was built, relieving the weekly conversion of the school room to a Church.

Dr. Foley built the present school in 1924 and the former school was used as a parish hall.

For a number of years two novices replaced the lay teachers, travelling to St. Aloysius by tram.

Until 1908 no financial aid was given by the Administrative Council of the Church and a fee of sixpence per week was paid by parents who could afford it. 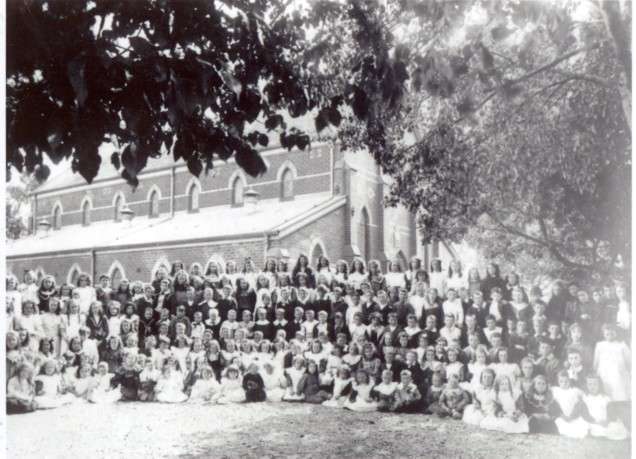