An Extraordinary Tale of Love for Others 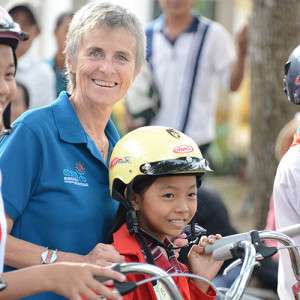 Loreto Sister Trish Franklin AO may take you by surprise as she passionately cheers on her favourite Carlton football club while sipping on a beer. However, more importantly Trish is dedicated to her mission and with a giant heart has helped to educate over 55,000 children in Vietnam through the Loreto Vietnam Australia Program (LVAP) she established almost 20 years ago. In that time LVAP has implemented development programs across five very remote Provinces where no other charities are operating.

Prior to her time in Vietnam she also worked among refugees in the Thai/Cambodia border camps, even settling some into Australia. Trish brought a calm and cheery presence which radiated hope to many of the refugees who suffered terribly at the hands of the Khmer Rouge regime.

The podcast interview will provide an insight into a woman who has devoted her life to serving the poor and helping special needs children. Trish has received many esteemed awards, including an Order of Australia in 2005 and recently was presented with the highly prestigious Vietnam Friendship Medal, signed off by the President and Prime Minister of Vietnam. The Friendship Medal is the highest official recognition that a foreigner can receive and as Trish humbly said, “I now no longer need a visa to enter the country!”

Please click on the podcast link below to listen to a one-on-one conversation with Trish Franklin in the ‘Loreto Women Making a Difference’ podcast series. Subscribe in SoundCloud for more episodes so you don’t miss any.

Please include a note asking for your donation to be directed to LVAP. Address to send a cheque is:
Mary Ward International Australia
Suite 105, 3 Eden Street
North Sydney 2060 NSW Australia