On the Feast of Pentecost 2019 the Generalate of the two branches of Mary Ward’s 1609 Institute indicated their strong desire to take steps toward unification.  An area of the Institute’s life where collaboration is strong is that of JPIC (Justice, Peace and the Integrity of Creation). Here we meet three new Mary Ward leaders responsible for mobilising and animating our global JPIC network. 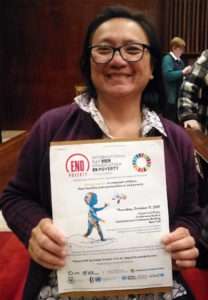 Welcome to Sr Janet Palafox ibvm, UN NGO representative for the Mary Ward network, New York. The role of the UN NGO representative is to link the IBVM/CJ network to the work of the United Nations through sharing information and encouraging participation in local, national and global social issues. They participate in UN conferences, information briefings and meetings/interventions through written and oral statements, events and surveys. Most importantly they provide an opportunity for the voices and concerns of people on the ground to be heard by the global community. In collaboration with other NGOs they advocate for a more just, humane and sustainable world.

Janet’s passion is Catholic Social Teaching and our responsibility to advocate and work in solidarity with the most marginalised in our community. A member of the province of Australia and South East Asia, Janet has a background in community development, advocacy and awareness raising. Janet was with the IBVM Peru Region as the Director of Mary Ward Peru until 2018 and previously worked for Caritas Australia, Centacare Wilcannia-Forbes, and MWIA. She is a former member of the IBVM UN Advisory Committee, Loreto Justice Network, ACRATH and Jesuit Mission Advisory Board. Janet will take up her role in New York once Covid-19 restrictions are lifted and international travel resumes.

For further information about our presence and role at the United Nations: 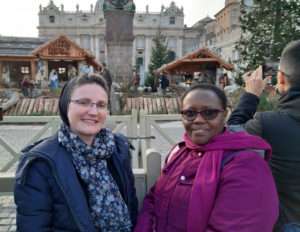 A recent initiative is the appointment of two full-time Mary Ward JPIC Co-ordinators at the international level to co-ordinate, encourage and develop JPIC engagement in all parts of the Mary Ward network. Our spirituality places the issues of JPIC at the centre of our mission and ministry and this Office will assist in making our approach to justice more explicitly focussed on our Mary Ward and Ignatian way.

With a background in law Adina Bălan joined the Romanian Province of Congregatio Jesu in 1998. Adina has a long-held passion for the support of victims of human trafficking and domestic violence, most evident in her role as Director of the NGO SOLWODI (Solidarity with women in distress). Adina is also a Core Group member of the prominent anti-trafficking organisation – RENATE (Religious in Europe Networking against Trafficking and Exploitation). With her colleague Pauline, Adina is also a current member of the Advisory Committee of the CJ/IBVM UN Office. As a members of the Eastern Africa Province, Pauline Macharia ibvm has a background in education and pastoral ministry in Kenya. She has also worked in JPIC ministry and with vulnerable women in her parish.  Pauline has served on the Mary Ward International Team and the Advisory Board of the Zaida Centre for Ignatian Spirituality. Adina and Pauline have been setting up their office in Rome and connecting with Province Justice Co-ordinators around the globe.  Until their website has been developed, please support their efforts via FaceBook.

We offer Adina, Janet and Pauline the prayerful and practical support of the Mary Ward network across Australia and South-East Asia.