Reflections from the United Nations 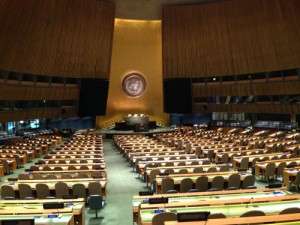 For many the image of the UN is of a large, ponderous bureaucracy striving for world order against insuperable odds – while there may be a grain of truth in this it is far from the truth. Having just come back from working for four months in the IBVM/Loreto Sisters Non-Government Office at the UN I now have the time to reflect on our work and the work of the United Nations. The Loreto Sisters join in the work of other religious congregations, other faiths and not for profit organisations at the UN in bringing the voice of civil society and the grass roots experiences of the people they represent to the floor of the UN. The IBVM/Loreto focus is mainly on Women and Children within the context of the seventeen goals of the 2030 Sustainable Development Agenda around education, awareness raising and advocacy. The specific areas of involvement are: The Eradication of Poverty, Education for Global Citizenship, Trafficking in Persons, Gender Equality, Youth involvement and Financing for Development. The Executive Officer, Sr. Cecilia O’Dwyer, born in Ireland and a citizen of Spain, brings considerable experience to the task of conveying the key global concerns of the Loreto Sisters and their colleagues to the UN and ensuring that the important issues of the UN, particularly the Sustainable Development Goals, are disseminated to Loreto communities, schools and ministries across the globe.

Working in the Loreto UN Office was a totally absorbing and interesting experience as I went from large global gatherings in the UN Assembly Hall to small side-events where Indigenous leaders, climate scientists and women from developing countries spoke of the challenges they face. I had barely arrived when 8,000 women descended on the UN for the Commission on the Status of Women, bringing stories of impoverishment, domestic violence and vulnerability. I was particularly appalled by the lack of protection for domestic workers in places such as Singapore, Hong Kong, the Middle East and, undoubtedly, in some parts of Australia and set about doing some research which resulted in a short paper and a video.

The Indigenous Forum, which opened in a blaze of coloured national dresses and amazing headgear, was confronting and saddening as people from the Arctic to the Amazon told stories of discrimination, racism, loss of culture and language and the decimation of their ancestral lands. An utterly moving experience was hearing from a small group of Amazonian forest dwellers their efforts to protect the forests from climate change, rapacious ranchers and the destruction of mining companies. Inviting us to hold hands their leader sang a creation song which told of their role as the protectors of the forest – a role largely ignored by those who wish to exploit rather than protect and conserve.

Human trafficking and issues to do with refugees and migrants were constant themes of UN meetings and of the many organisations working to give voice to civil society. The refugee concerns of Australia pale into insignificance when confronted with the 2 million refugees in Turkey, the doubling of the population of Lebanon, the 740,000 in drought affected Ethiopia and the escalation of violence in South Sudan. The UN is working to bring all member states to agree to major Compacts on Migration and Refugees.

The first Oceans’ Conference gave leaders of the small Pacific Island nations an unprecedented prominence as they told of land loss, depleted fishing, increased storms and a lack of finance to mitigate the worst effects of climate change. Marine scientists, Indigenous people, conservation and ecological organisations revealed a suffering ocean – acidic, filled with ghostly discarded fishing nets capturing unsuspecting marine animals, and worst of all, with plastic washing up on beaches, breaking down into pellets ingested by fish and birds. As soon as I came home I began to plan how I could limit my use of plastic – no small challenge!

The UN may be bureaucratic and ponderous but despite all its problems person after person comes with optimism and hope that here is this meeting place of all nations solutions may be found, support given and a new future forged. There is a way forward if countries honour their commitment to eliminate poverty, leave no one behind and implement the 17 Sustainable Development Goals.