A senior United Nations official has warned that 20 million people are starving to death in the worst famine since World War II.

The Loreto community stands in solidarity with the most recent call by Melbourne Archbishop Denis Hart, who has urged Australians to support the plight of people suffering across many East African countries due to widespread famine.

“I am shocked to learn of the harrowing plight facing millions of people in a number of countries in East Africa. Sadly, there has been little coverage in Australia of this emerging tragedy. I am lending my voice and that of the Catholic Church in Australia to urge you to help if possible,” Archbishop Hart said. 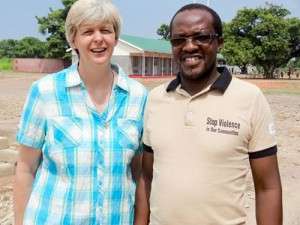 While the month of May brought with it more hunger and insecurity, Loreto Rumbek in South Sudan has been able to continue its critical work of education under the guidance of Loreto Sister Orla Treacy. South Sudan has unfortunately earned the title of “the most fragile country in the world”.

It is indeed hard to see the solution to the many immediate problems facing the people of South Sudan, but important change is occurring that has the potential to create long term solutions for the country.

One of the changes is by providing better education. Loreto Secondary Girls’ Boarding School in Rumbek has now grown to support 251 resident students. Recently seven of their school-leavers qualified to be undergraduates at the Catholic University in Juba. Four years of secondary school and three at University is a great achievement by these girls in a society where 7% of girls are married before the age of 15 and 42% between 15 and 18. A fifteen-year-old girl has more chance of dying in child birth than of graduating from secondary school.

Thanks to Loreto Rumbek the situation is changing and a new generation of educated young women and men is emerging. Loreto has more than 600 boys and girls in their primary day school where they are achieving an extraordinary attendance rate of 95%. In the short space of three years the primary school has evolved from teaching under trees to modern day classrooms. Loreto is truly a sign of hope. Providing education means more opportunity, especially for women, to help create a better South Sudan.

Loreto Rumbek have cultivated land within the school compound and is erecting a massive security barrier to protect their food crops and supplies as the situation worsens. The school has employed local trainee masons to build the barrier in a project funded by Mary Ward International Australia.

The Loreto Sisters are very grateful for the generous donations that have enabled Loreto Rumbek to continue its critical ministry of education under such difficult circumstances.

Please consider donating to the Loreto community in South Sudan through Mary Ward International Australia. Without your support this work would not be possible.